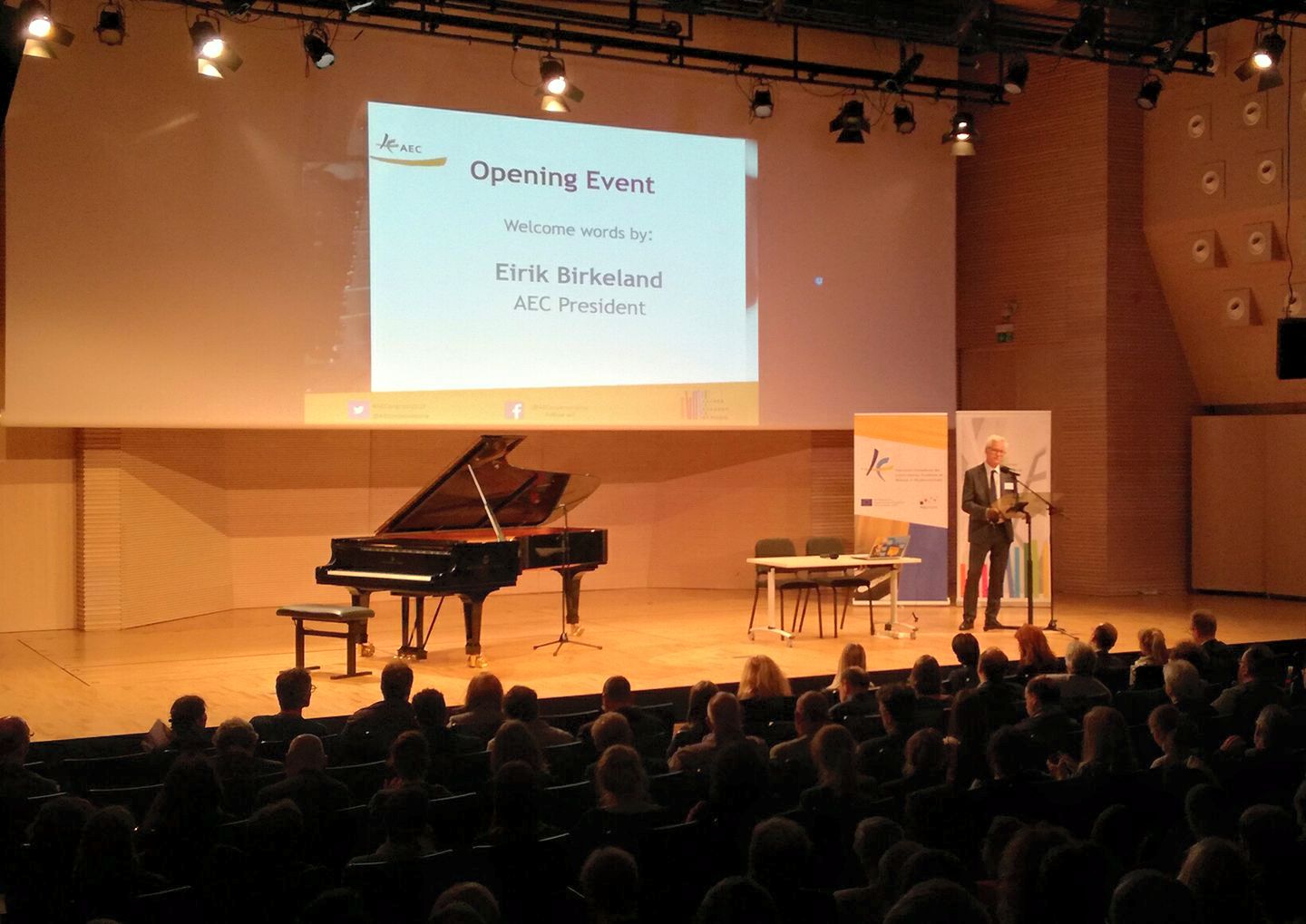 The 44th AEC Annual Congress and General Assembly 2017 took place at the Academy of Music, University of Zagreb,  in Croatia on 9th – 11th November under the title “Leadership in the Arts, the Arts of Leadership”. This theme covered various aspects with a special attention to the relationship between freedom and governance, and the tension between top-down and bottom-up.

The sessions proposed, including the keynote speeches by the former President of Croatia and former student and teacher of the Academy of Music Ivo Josipović and by Thomas Meier, President of ELIA and of the Zurich University of the Arts, aimed at triggering a debate on the impact of these concepts and of the current global trends on the higher music education sector.

The following sessions related to the topic of leadership in the arts, but also to the theme of Identity, Diversity and Inclusion addressed last year at the AEC Congress in Gothenburg, were proposed:
Participants also had the opportunity to propose topics for an opening brainstorming session in breakout groups. The list of topics proposed and discussed is available at the event page on the AEC website under the tab “Photos and documents” and “Slides”.

The event featured two special guests: Sue Haug, President of the NASM (National Association of Schools of Music USA), and Bogdan Zdrojewski, Polish Member of the Culture and Education Committee of the European Parliament (CULT), who wrapped up the second day of the Congress, positively commenting on AEC’s work.

A “snapshot” session about services offered to AEC members completed the wide range of topics covered by this year’s Congress: the new AEC Learning Outcomes 2017 were presented as well as the new AEC’s European Online Application System for Exchanges in Higher Music Education – EASY. The Foundation for Quality Enhancement and Accreditation in Higher Music Education, MusiQuE – Music Quality Enhancement, was also given the opportunity to present its services, activities and philosophy to AEC members.

As every year, participants met in Regional Groups, chaired by Council Members. Alongside this usual format, an additional session mixing regional groups to discuss specific topics was proposed this year in order to let AEC members from different regions exchanging view on the following issues:
The AEC Congress was preceded by three Pre-Congress Workshops:
The increasing presence of students was another remarkable feature of this edition: local and international students took part in the event and joined conservatoires manager and directors in important discussions concerning the future of higher music education. The handbook “Increasing Student voice in Higher Music Education Institutions: tips and guidelines from the AEC student Working group” was presented and disseminated during the event and it is available on the AEC website in pdf or in printed version upon request at info@aec-music.eu.

The AEC General Assembly 2017 on Saturday 11th November featured the AEC Elections, which have brought to the Council Iñaki Sadndoval from the Viljandi Culture Academy, Estonia as new Council Member and have confirmed Georg Schulz (University of Music and Performing Arts Graz, Austria) as AEC Vice President and Claire Mera Nelson (Trinity Laban Conservatoire of Music and Dance, London) as Council Member. A short report of the General Assembly has recently been sent to all active and associate members, and the full report will be sent once provisionally approved by AEC Council.

Finally, during the Closing Session the Principal of the Academy of Music, University of Zagreb Dalibor Cikojevic handed over the “AEC Congress Trophy” to Elisabeth Freismuth, Rektorin of the University of Music and Performing Arts Graz, who invited all AEC members to join the AEC Congress 2018 on 8 -10 November in Graz, Austria.

The event has been evaluated by the participants through an online questionnaire sent by email after the closing session. The feedback has been generally very positive. All the documents and slides of the AEC Annual Congress 2017 are available at the event page on the AEC website under the tab “Photos and documents” and “Slides”.