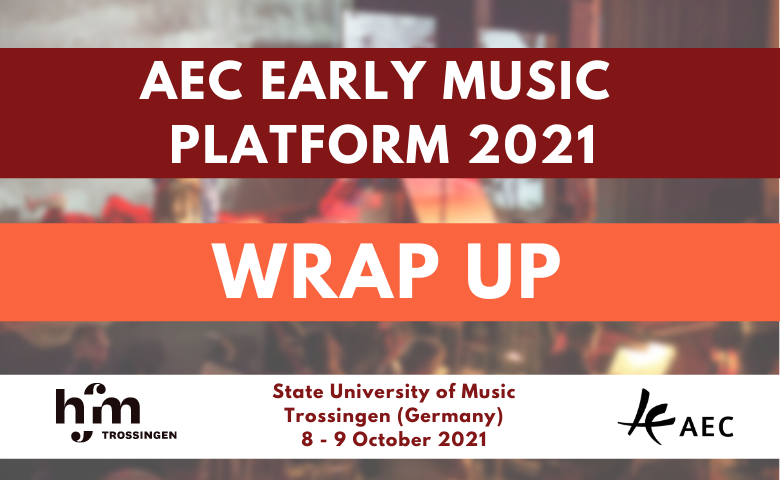 The 2021 AEC Early Music Platform took place at the Staatliche Musikhochschule Trossingen, Germany on 8-9 October under the title “Historically Informed Performance – Is it enough to just be informed?”

This year’s edition was the first Early Music Platform meeting organised in a hybrid format, with both online and in-person participants. 62 came to Trossingen to enjoy presential sessions and real-life networking while 26 joined remotely.

During the two-day event, participants got to benefit from a rich and full program. The Early Music Platform meeting featured keynote speeches, lectures and discussions in different formats, panel debates, breakout groups and concerts. Over 20 speakers contributed to this year’s program covering a variety of different topics and giving their insight to the main question of the event “is it enough to just be informed?”.

On the morning of the first day, a pre-conference workshop was given by Jennifer Ward on the RISM (Répertoire International des Sources Musicales) database. Participants learned how to use the catalogue of Musical Sources to find historical music manuscripts and printed editions for their instrument or ensembles.  At the opening session, Marike Spaans gave a presentation of the Staatliche Hochschule für Musik Trossingen and Peter Nelson presented the history of the AEC Early Music Platform – the first meeting was held in Trossingen in 2009, 12 years ago!

The first plenary session was dedicated to the main topic of the event. Michael Meyer, from the Staatliche Musikhochschule Trossingen, gave the keynote speech entitled “Machen Sie es wie sie wollen, machen Sie es nur schön”: Johannes Brahms, his interpreters, and performance practice.” The session also featured pitches on the HIP topic from students and teachers who later participated in an engaging and lively panel discussion with the audience moderated by Ashley Solomon. In the evening, participants were pleased by a concert with the chamber orchestra L’orchestre héroïque under the leadership of Anton Steck.

The second day of the event featured a variety of different sessions. In the morning REMA, the European Network for Early Music, gave a presentation about their work. The program continued with the second keynote by Kai Köpp entitled “Authenticity in 19th century performance – the inside perspective”. Afterwards, participants had the opportunity to choose between 4 parallel sessions delivered in 2 sets, which were followed by breakout groups where the speakers and the attendees had the opportunity to discuss and share thoughts on the topics presented during the sessions.

In the afternoon, participants appreciated a lunch concert with Bettina Phan and Christine Schornsheim, who performed songs by Fanny Hensel and Clara Schumann. The conference program continued with the third plenary session entitled “Challenging assumptions” where four speakers contributed. For the last session, the speakers of the plenary session joined a final panel discussion on the Standardization of Early Music today moderated by Ashley Solomon. The event finished with a Student Concert where students presented music by Schumann and Ferdinand Ries.

AEC would like to warmly thank everyone who made this platform gathering possible, in particular the hosting institution in Trossingen and the Early Music Task Force, but also all the engaged participants who have always supported the platform and given an important contribution to the development of the Early Music education sector.