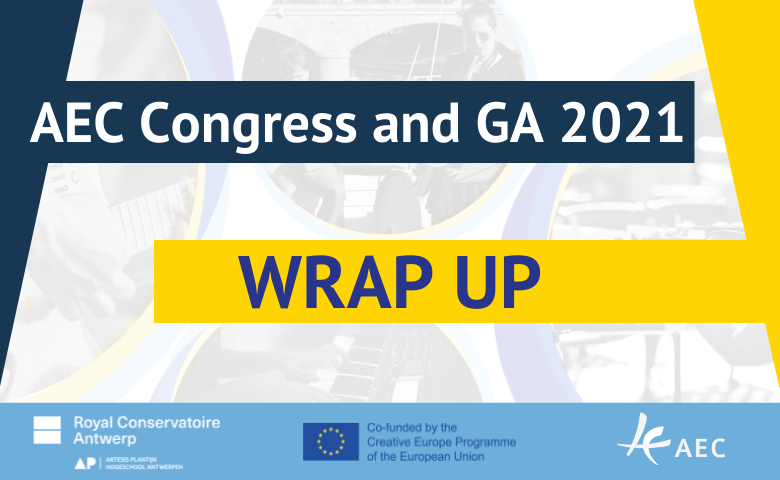 The 48th AEC Annual Congress and General Assembly 2021 took place at the Royal Conservatoire in Antwerp, Belgium (RCA) and online on 3-6 November 2021 under the title “Building Bridges: Artist as Makers in Society”.

This year’s edition was the first AEC Annual Congress and General Assembly organised in a hybrid format with both online and in-person participants. About 250 participants came to Antwerp while about 120 joined remotely, taking part in purely in-presence sessions, purely online sessions and hybrid sessions held physically at the Royal Conservatoire in Antwerp and streamed for the online audiences.

Watch the short video summary of the event and grasp the atmosphere of the 48th AEC Annual Congress and General Assembly 2021 in Antwerp!

The title of the 2021 AEC Congress was related to the EU-funded project AEC –  Strengthening Music in Society (SMS) whose final outputs were presented at this congress. The motto Artists as Makers in Society underlines the responsibility that each individual artist, as well as institutions for professional artistic training have towards the society as a whole and for the well-being of individuals and communities now and in the future.

Over the course of 3 days, over 100 speakers contributed to 30 sessions. The programme offered the usual mix of workshops, discussion forums, best practice presentations, panels, and plenaries.

Mokhallad Rassem, guest teacher at the drama program in RCA, gave the keynote speech entitled “Building Bridges” in the first Plenary Session of the event. Here he presented his poem “Talking Roots” written for the occasion.

In the second Plenary Session, the 20-min film introducing the audience to the extended paper published by the SMS working group 1 on Music in Society, entitled Musicians as “Makers in Society”: A Conceptual Foundation for Contemporary Professional Higher Music Education was premiered. The film was followed by three respondents offering their perspectives on the article in a panel discussion moderated by Henrik Sveidahl.

In this year’s programme participants had the opportunity to choose between a variety of different parallel sessions. The sessions covered a wide range of topics such as: diversity, interdisciplinarity, power relations, reaching out to new audiences, joint programmes, artistic research and digitisation.

In total 30 discussion groups took place during the AEC Congress creating several moments for both in-person and online participants to engage in discussions on various topics.

As every year, participants also had a chance to discuss relevant issues in Regional Meetings, chaired by Council Members. In addition to this, there were discussion groups on specific topics proposed by the AEC Council on the following three topics:

The AEC Congress was preceded by four Pre-Congress Workshops:

At the General Assembly, which took place on Saturday 6 November, a number of important decisions were made. The General Assembly approved a revised version of the AEC Statutes and the revised AEC Strategic Plan (2016-2023). The full report will be sent once provisionally approved by AEC Council.

On the last day, the final outputs of the Creative Europe project “AEC – Strengthening music in Society” were presented by the eight Working Groups active within the project. The final outcomes of the project can be found on the SMS brochure.

AEC members also had the opportunity to present their own projects during the Information Forum, where speakers, after a brief pitch in the main hall, had the chance to meet and speak informally with colleagues who wanted to know more about their initiatives.

All presentations of the AEC Annual Congress and General Assembly 2021 are available on the event page on the AEC Website. Registered participants will soon receive a report with all links to the materials and the recordings of the hybrid and online sessions.