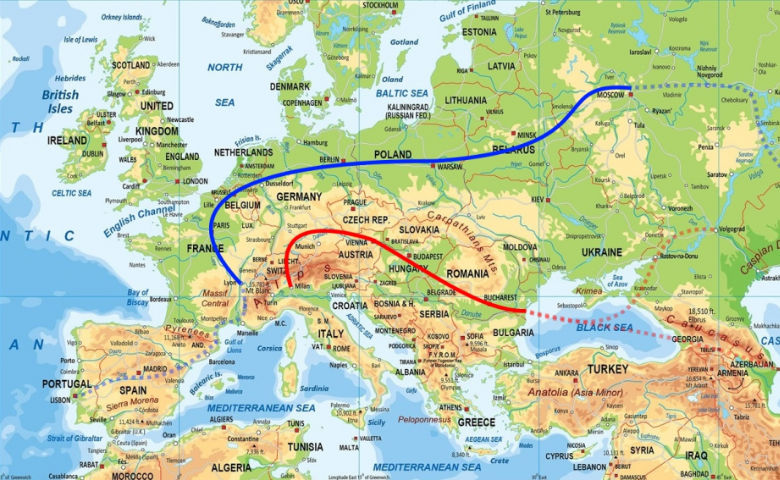 More than 2000 years ago, the Silk Road became a symbol of peace, exchange, and cooperation between Europe and East Asia. Today, China is pursuing economic and power-political interests with its ‘New Silk Road’ referring to its historical self-image as the ‘Middle Kingdom’. Until now, there has been little to no European response to these developments, but in view of war and climate crisis, a grand vision of a modern high-speed train network and green infrastructure project is now emerging with the European Silk Road with the intention to strengthen the European project against encroaching power projections by connecting the industrial centres in the West with the populous areas in the East.

The project will be supported by a digital platform (‘The European Silk Road App’) showcasing artistic and creative projects engaging with the vision of a European Silk Road by responding to and reflecting on questions such as: What would a European version of the route look like? Is it an ecological project? A value narrative? A unifying idea as a bottom-up civil society initiative between North/South and East/West? Or a cultural participation project? The goal is to use this opportunity across Europe, to identify and discover the hidden potentials – the quiet, often still unheard voices – and to give them a chance to embark on a journey together.

Are you interested in being part of this exciting project? Then feel free to submit your application together with a short description of the contribution based on the artistic reflection on the idea of a European Silk Road based on the value-index.

The project can provide:

The project is aimed in particular at young and emerging artists, but open to everyone.

If you have any further questions, feel free to contact Jan Moritz Onken.