Higher Music Education Institutions (HMEIs) play a crucial role to safeguard, develop and promote European cultural heritage and diversity, to facilitate access to cultural offerings and cultural education for all, and to contribute to economic growth through the creation of new jobs and new business models in the creative sector. 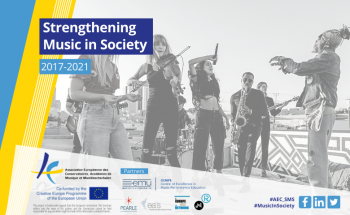 AEC – Strengthening Music in Society: the project outputs are here for you! 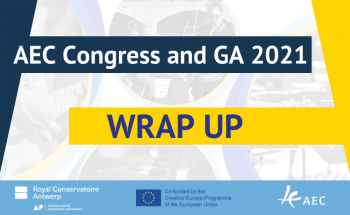 In the last four years The Association Europeénne des Conservatoires (AEC) and the Europe Jazz Network (EJN) have engaged in in an ongoing dialogue on possible collaborations between their respective members with the aim of supporting emerging artists coming from formal higher music education and entering the market. After several brainstorming meetings organized in the framework of the AEC’s FULL SCORE project and the EJN’s Education Beyond Institutions project (2014-2017), the two networks have decided to renew their collaboration in the framework of their new Creative Europe granted projects for networks 2017-2021 in order to produce a tangible output out of their longstanding dialogue: a joint project between conservatoires and festival/clubs to support the career of young artists at international level.

The preliminary meetings which took place in 2015-2017 and the survey launched among AEC members in Spring 2018 showed that a possible project can be based on the transnational mobility of young artists/music students to foster the entrepreneurial mindset of music students as well as overcome the gender misbalanced in jazz studies. Audience development is also a topic which could be addressed by such a project.

The main project goal is to strengthen the competences of future young musicians in order to increase their future employment opportunities. Foreseen project activities could range from practical seminars and masterclasses, lectures, workshops, mentoring activities and residences which could help young artists to step into the market, to communicate with promoters, audiences and media, to build a professional network, and generally to develop a solid set of business skills in addition to their artistic ones. Promoters could be involved in mentoring students, providing counselling to conservatoire teachers and managers when designing curricula and involving educational institutions in their programming. Also, a study on the state of the art and best practices of conservatoires and festivals collaborations as well as policy recommendations for stable collaborations between conservatoires and festival/clubs embedded in the study curricula could be foreseen as project results.
Sustainable outcomes of the project could be well established and curriculum-based collaborations between the involved organizations

The possible funding schemes considered suitable for such a project could be Creative Europe grants for Cooperation Projects and the Erasmus+ Key Action 2 Strategic Partnership in the field of Higher Education. The meetings taking place in Autumn and Winter 2018/2019 will aim at defining project aims, objectives, activities and results and at filling in a project application for a first submission attempt in 2019. EJN and AEC will take care of the coordination of such an activity and will help one of the involved organization to apply for funds as project leader.

The following EJN and AEC members have been selected according to their indication of interest and geographical spread to be part of the project writing task force.